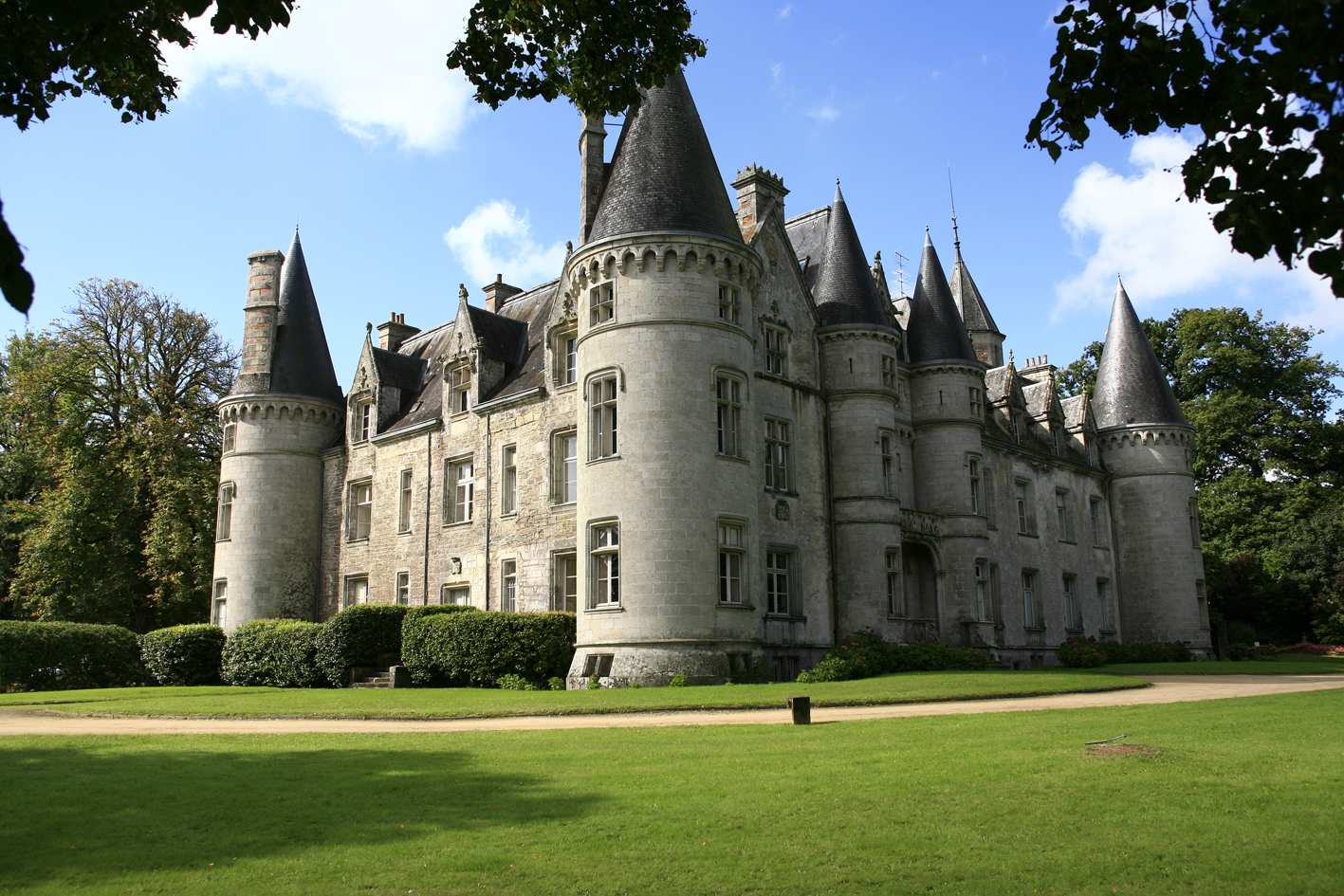 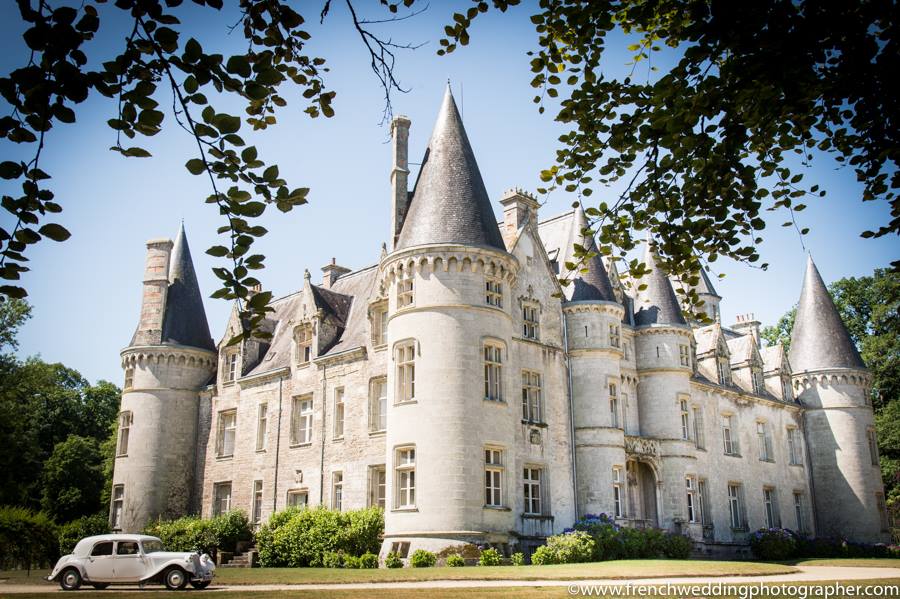 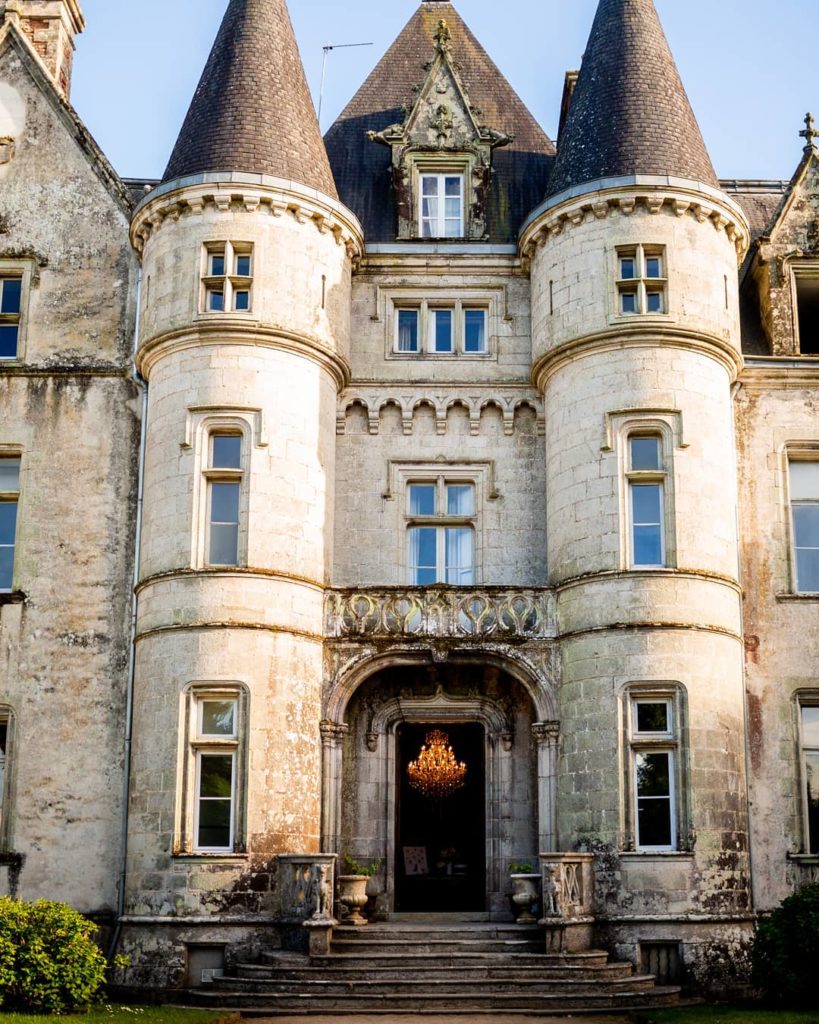 The Résidence of the dukes of Brittany

Up to the beginning of the 17 th Century, Trédion was part of the domain of Largoët and owned by the Lord of the fiefdom.
According to Hervé du Halgouet, a descendant of Alain I, called the Great, King of Brittany, would have inherited the domain of Largoët in the 12 th century which was, however, going into the ownership of the Malestroit family.

The Malestroit family owned Trédion up to the middle of the 15 th Century : In 1461, Françoise Raguenel, Dame of Malestroit, got married with Jean IV, Lord of Rieux and of Rochefort, and Marshal of Brittany. This Lord died little time after the rebuilding of the Manor of Trédion – nevertheless, you can still see his coat of arms can on the façade of the Château.

Claude I of Rieux, son of Jean IV and Isabeau of Brosse, his third wife, inherited Largoët and Trédion in 1518. After his death in 1532, Suzanne of Bourbon took charge of the estate. Trédion then became the property of Renée of Rieux who, in 1541, had just married Louis of Saint-Maure, Marquis of Nesle.

Renée de Rieux died in December 1567 without an heir. Her assets, including the Estate of Trédion, became the property of her nephew, Guy-Paul de Coligny (1555-1586).
In 1584, two years before his death, Guy-Paul de Coligny then sold Largoët and Trédion to his stepmother, the Princess of Salm.

Anne de Coligny, daughter of the Princess of Salm, inherited Largoët and Trédion in 1613 which she then sold to Jean of Rieux-Assérac. When the latter died in 1630, Jean-Emmanuel of Rieux-Asserac who was the governor of Guérande at that time inherited Trédion but found himself under the burden of an excessive amount of debt that he had no choice but to part from all his possessions in 1643.

In 1650 Pierre II of Sérent, was granted by the King the legal right to gather all his lands into a viscounty, as a gesture of gratitude for his services to the crown. However, at the same time, Nicolas Fouquet (1615-1680), the Superintendent of Finances during the reign of King Louis XIV, bought Largoët, which he wished not to be split from Trédion. Fouquet tried to also acquire the assets from Pierre de Sérent but had consecutively failed.

Charles II of Lorraine, Duke of Elbeuf and Peer of France, became owner of the Estate of Trédion afterwards. His wife, Catherine-Henriette, was the legitimate daughter of Henry IV, King of France, and Gabrielle d’Estrées.
Following that period, it remains unclear who the actual owner to this lordly residence was during the time between 1650 and 1675.

What is known for sure: in 1676, the heirs of Charles II de Lorraine had to sell the estate, the « chasteau » and seigneury of Trédion. The buyers were Louis Alvarez, the treasurer of His Majesty’s Cents-Suisses, and Martin Moisan, a bourgeois from Paris. On November 8 th 1683, the two of them resold two thirds of the assets to Marguerite Sapien. She was the wife separate from property of Charles Fouquet de la Ferronnière (Charles Fouquet himself was the cousin of Nicolas Fouquet, the intendant of King Louis XIV. Nicolas Fouquet had made a huge fortune thanks to his role in His Majesty’s government and started the legend of the hidden treasure that is supposed to be buried by Charles Fouquet, his relative, under an oak tree in the park of the castle).
Charles Fouquet died at the Castle of Trédion where he was buried inside its chapel on September 6 th 1704. His daughter Sylvie Fouquet, who inherited Trédion, also died at the castle on May 18 th 1740.
Guy-Joseph-Joachim de Lantivy, son of Sylvie Fouquet who had married Yacinthe of Lantivy on January 25th 1709 then inherited Trédion. He died on January 13 th 1751, and the day after was buried « in the grave of his ancestors, in the chapel of the Castle of Trédion ».
His son Jean-Louis de Lantivy became the new owner but preferred to stay away from it, when the
French Revolution started.

After the turmoil caused by the French Revolution, the castle was sold to a French citizen by the name of Guillenet. On November 6 th 1825, Guillenet sold the property on to Pierre-Marie Tuffier who gave it up on July 21 st 1834 to sell it to Hippolyte du Fresne de Virel. In 1840 the latter had a blast furnace built into the castle for castings made of iron. 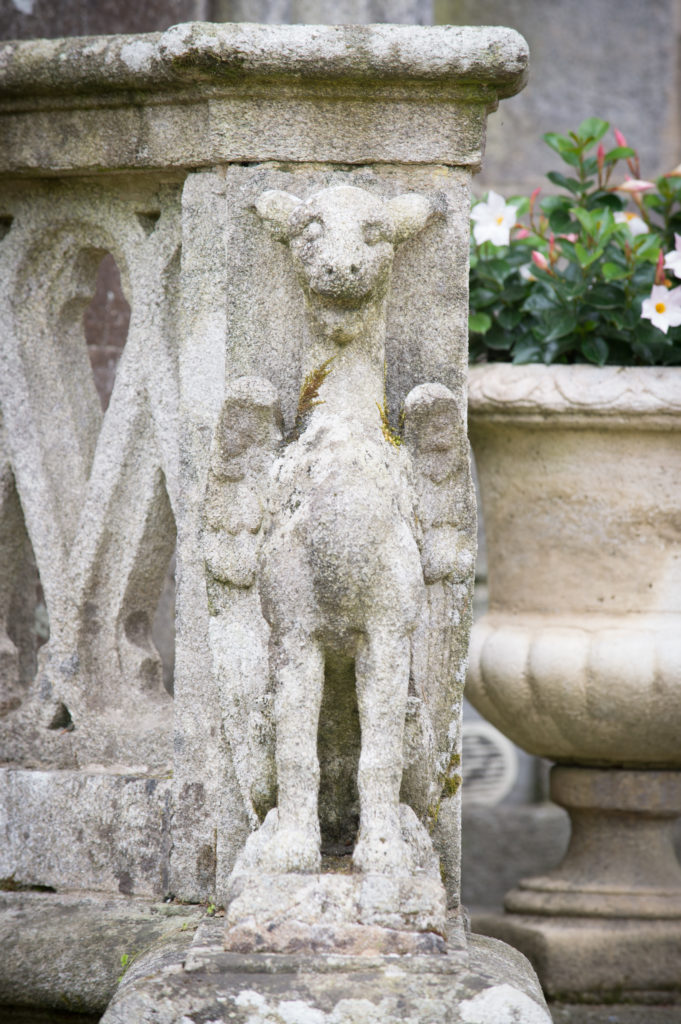 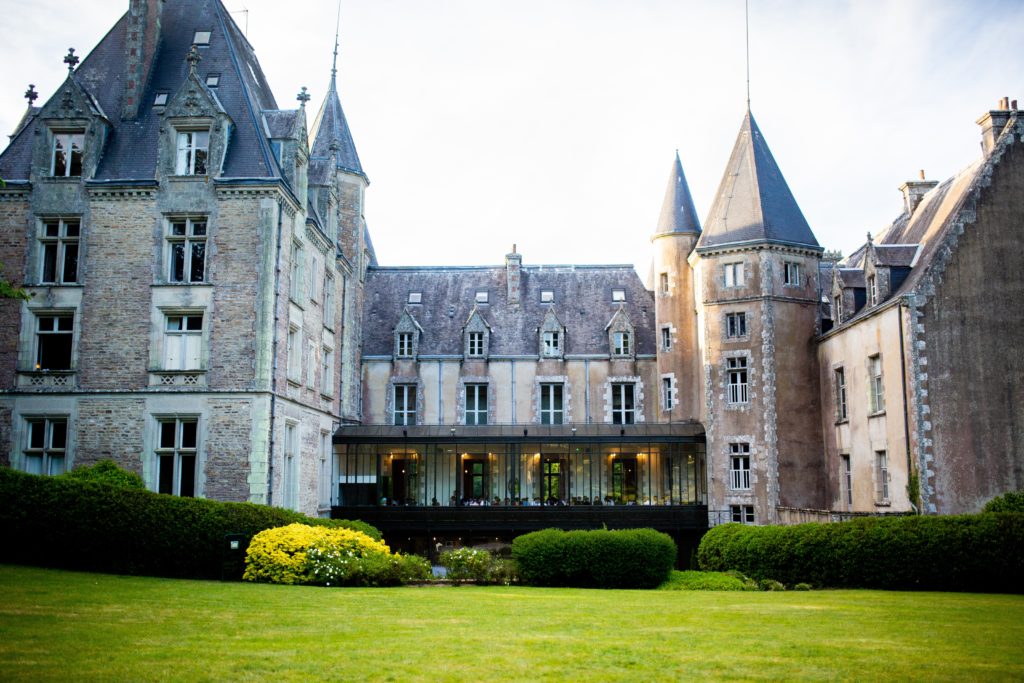 The expansion of the Castle

In 1851-1852, soon after his father’s death, Henri-François-Eustache du Fresne de Virel decided to restore the Castle of Trédion and entrusted Jacques Mellet, an architect from Rennes, with the works.

Effectively rebuilding the castle, the works were finished in 1859 and cost about 300,000 French Francs. From the 14 th century Manor, which is the eastern part of the castle, Mellet only kept the entrances. This abode, which was the main residential building without any military enhancements, was entirely transformed by the addition of a perpendicular wing to the north. With the works done, the capacity of the Château de Trédion had increased from 9 to 34 rooms.
From an architectural point of view, the manor did become a castle when the towers were built during this “castellisation”.

Twenty five years later, in 1844, Henri du Fresne de Virel decided to further modify the castle, and entrusted an architect from Paris, Ch.  Lorotte, with the construction of it. He added a second residential building at the very western end of the new wing, as well as a large conservatory, supported by cast iron pillars, which doubles the living space facing south. Contrary to Mellet, who had chosen to prioritise the outer beauty of the castle, Lorotte made the inside beauty his priority.

Henri du Fresne, Earl of Virel, died on January 27 th 1892. He had two sons : Alban-Victor, heir of Trédion, and Olivier.

Alban de Fresne, Earl of Virel, owned the estates of Trédion, of Grégo (in Surzur) and of Vaudequip (near Allaire) in the Morbihan  department, of Virel (in Renac) in the Ile-et-Vilaine department, of Plessis en Saint-Aubin-des-Châteaux near Chateaubriand in Southern Loire and of Percey in the Yonne department. 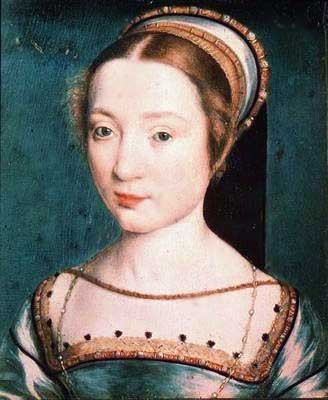 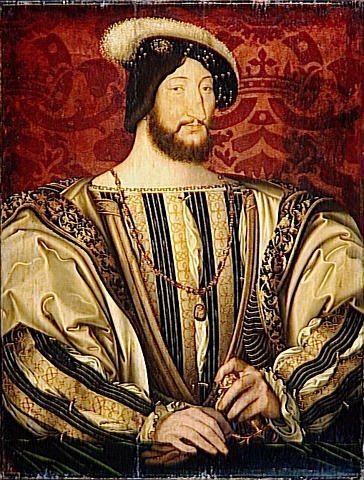 If the Castle of Trédion was inhabited by famous nobles from the 14 th to the 19 th Century, even more famous guests visited it, among them :

Accompanied by Queen Claude de France.
Francis I wished to show the kingdom to his wife, Queen Claude of France, who was the daughter of Anne of Brittany (but was born in Romorantin in 1499). They started their journey with the visit of the Duchy of Brittany which she inherited from her mother, unbeknownst to her.
On August 31 st 1518, as they were riding back from Nantes to Vannes, they stopped at the Manor of Trédion where they ate and slept with an escort which was said to be around 10,000 strong and which was seen from afar by the royal fleet off the coast of Brittany.

Guest of Gaspard of Coligny, the leader of the Protestants, at the Castle of Trédion in May 1570. 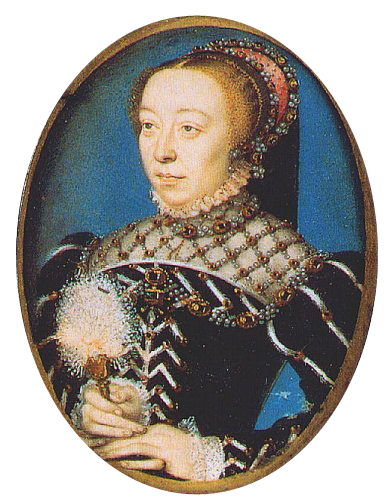 Was Catherine de’ Medici with the King at the Manor of Guy de Rieux? We have no proof that she was, but what we do know is that she was the Coligny’s guest at Trédion a few days later (the Coligny and the Rieux families were the most belligerent of the Protestants in Brittany).
Guy-Paul de Coligny inherited Trédion in 1567. In May 1570, he was only 15. Was his uncle Gaspard de Coligny, the Admiral of France, at Trédion to welcome the Queen Mother? We cannot confirm he was but it is highly probable.

What is known is that Catherine de’ Medici stayed at the Castle of Trédion at least twice. The first time was from May 19 th to 23 rd . It was the time when she wrote a letter to “Sir Nicolay, President, and Sir Guyot, Master of Accounts, counsellors of King Charles I, my son” and dated from “the 19 th day of May 1570”. The contents of her letter can be read below this description (facsimile document and translation in old French, the letter can be read at the National Public Library).

Some time later, she stayed at the Castle again for one week. A second letter indicates that Charles IX was not with Catherine de’ Medici at Trédion.

It is worth mentioning that the Queen Mother did not leave the King and gave up the sumptuous royal life style without any worthy motive.
During her stay, she started writing the Peace of Saint-Germain which was signed on August 8 th 1570. This treaty acknowledged the freedom of conscience for the Protestants and allowed them to practice their religion.
But the truce did not last long. Catherine de’ Medici soon came to considered Gaspard de Coligny to have a bad influence on the King, a sentiment which culminated in the Protestants being massacred during Saint Bartholomew night, on August 24 th 1592.